Panchakarma as the word suggests depticts the five activities that are carried out for the complete detoxification and purification of the body. In the native language of India, Panch translated as five and Karma as action. This technique is the basis of Ayurvedic therapies and have been used ever since the conception of Ayurveda. The focus of Panchakarma is on the organic body under the broad guidelines of Ayurveda. Once the organic body is balanced, the body and the mind get purified of all toxins thereby paving the way for full recovery.

The branch of Panchakarma focuses on the principle of Doshas or Prakriti of a person. There are three Prakritis which are known as Vatta, Pitta and Kapha. Ayurveda states that ailments are caused whenever there is an imbalance in these three doshas and focuse on bringing a balance in these doshas. The various branches of Ayurveda are Poorvakarma, pradhankarma and paschatkarma.

Poorvakarma therapies are the first step in Panckarma. The focus in Poorvakarma is one the various toxins and other poisons in the body which are hindering the functioning and overall growth of the body. This is done before the detoxification process takes place in Pradhankarma.

Several methods are used under Poorvakarma with the basic aim of perspiration or sweating of the whole body as that tends to release the toxins of the body. To accomplish this. Ayurvedic oils which are herbal in nature along with oil massages are performed.
Steam baths are also included to get the best possible result. 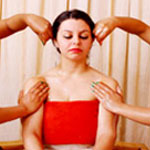 Pizchil treatment method in Ayurveda makes use of indigenous oils which is applied on the body which has an effect of warmth. The sessions of Pizchil are carried out by 2-4 specialists under the supervision of a doctor. There are seven standard positions in this form of treatment which end up covering the whole body. 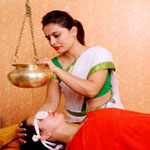 Sleeping disorders, migraines, gloom, stress and other similar ailments are taken care of by this treatment. In this form of treatment, fluids such as coconut water, oil are applied to the head of the person in a therapeutic manner for 40 minutes to an hour which results in the best possible outcome. 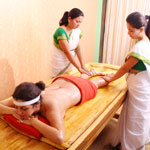 Abhyangam focuses on Marma points which gets rid of stoutness, sleeping disorders and other forms of weaknesses in a person. Oil is the primary healing weapon and the sessions vary from 45-60 minutes which take place over a period of 14 days. 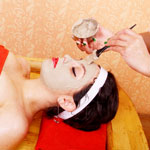 Lepanam is an ayurvedic form of therapy which takes care of skin diseases and prevention of skin problems. In this therapy, an ayurvedic paste is prepared with ghee and milk and is applied all over the body. The problem of joint pain may also be addressed by this form of therapy. 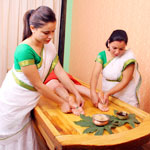 Fingers and clench hands are utilized to knead the entire body seriously or a body part to expel all the physical pressure. 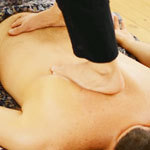 Trampling is a form of foot massage that is carried out after applying herbal oils. This is done to ensure that body becomes light and the tension gets released.

This is the second stage of Panchkarma. In this stage, through the use of various methods the poisons are completely eliminated. These methods are Vamana (Emesis), Virechana (Purgation), Niroohavasti (Decoction purification), Nasyam (organization of medication through nostrils), and Raktamoksham (phlebotomy). 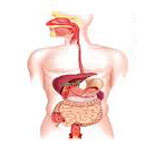 Vamana is a technique in which oleation is performed both internal and external followed by formentation and steam shower is performed on the person which purges the poisons form the body. Some of the Ayurvedic medication that is given causes vomiting that helps to remove the toxins through the mouth. People who are Kapha dominant body type benefit the most from Vamana therapy. Asthma, acidity and obesity are treated through this method.

When the purgation and elimination of toxins takes place through the bowels it is called the technique of Virechana. Oleation is performed followed by a herbal laxative which induces easy removal of all these poisons and toxins of the body. Virechana is best recommended for those with Pitta Doshas and various ailments of the stomach can be treated by this form of treatment. 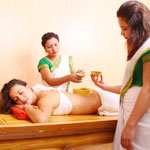 Diseases which can be recurring and chronic in nature are best treated by this form of therapy. Here, herbal oils are given to the guest for the complete detoxification of the bowels. This process is also known as sedated bowel purge. It is best for people with Kapha dominant doshas and helps in curing gastric issues, joint pains etc. 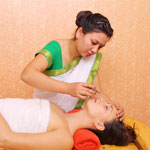 People with sleep disorders, respiratory problems such as sinusitis and even issues related with the mind such as migraines are advised the therapy of Nasyam. A massage is administered to the upper regions of the body followed by giving herbal drops to the nose. The entire skull area is purged of toxins through this method. 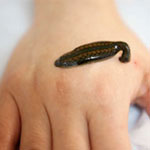 The deficit in quality of blood can be the cause of many ailments internally and externally. Therefore, the method of bloodletting helps in curing and solving various ailments such as eczema, psoriasis etc.

Paschatkarma treatment refers to nutritious dietary regiment that is followed after the previous two stages of Panchakarma. ’Precaution is better than cure’ and if one eats foods as mentioned in Ayurveda, then one tends to stay free of diseases and lives a prosperous life. The particular dietary necessity is:


At Haritha Yogshala, we ensure that our Yogshala guests recover completely and afterwards are able to lead a healthy life free from vices. You will feel the difference yourself and see the changes coming in your body.

The eating regimen can be tough to follow for those who have not been initiated to Indian food, therefore the diets are planned in such way that not only do they take care of your body but also your eating habits. So, if you are looking for a comprehensive wellness program which will not only help you recover but also make you lead a healthy and prosperous life, feel free to join any of our programs.

Ayurveda Courses and Retreats in Rishikesh We at Haritha offer a unique experience of a wellness retreats, It is a awesome chance to reach a state of mindfulness by unifying with the universe through the means of Yoga and Ayurveda.